Oh Joy! David O. Russell and Friends Are Back!

Could David O. Russell please stop casting the same people in all of his movies? I mean, for real. Like, for real, for real.
Hey, who was in that movie The Fighter? Mark Wahlberg, Christian Bale, Amy Adams, Melissa Leo.
Hey, who was in Silver Linings Playbook? Jennifer Lawrence, Bradley Cooper, Robert De Niro.
Hey, who was in American Hustle? Christian Bale, Amy Adams, Bradley Cooper, Jennifer Lawrence, Robert De Niro.
Hey, who is in that new movie Joy? Jennifer Lawrence, Bradley Cooper, Robert De Niro.
For fuck’s sake, David O. Russel, it’s like you’re trying to be the grittier, douchier version of Tim Burton. Except instead of lining up Johnny Depp and Helena Bonham Carter for every single movie, just turn Jennifer Lawrence and Bradley Cooper into every character conceivable. That blueprint has worked out spectacularly for Burton.
I mean, who didn’t love and adore the way he made childhood favorites like Alice in Wonderland and Willy Wonka into something straight out of a twelve year old’s erotic nightmares?! And I’m sure Steven Sondheim loved what he did with Sweeney Todd, turning him into the most boring story of singing, cosmetology and murder anyone has ever seen! Fuck, instead of slicing throats it would have been easier to just put everyone into a goddamn coma. I saw that movie on my birthday (my motherfucking BIRTHDAY) and I seriously fell a-fucking-sleep after 30 minutes. 30 minutes. And I was looking forward to that movie! Hell, when my roommate woke me up and I gave the movie five more excruciating minutes of my time, I ended up rolling over as much as my theatre seat would allow and I fucking went back to damn sleep.
Directors falling in love with certain stars and forgetting about everyone else on the planet has always turned out great. Not having to wonder where your next paycheck is coming from has definitely made Johnny Depp a solid choice for me. I mean, I look forward to every sell-out move he makes nowadays, whether it’s something from the now-constantly predictable Burton, a 15th Pirates of the Caribbean movie or just drivel like The Tourist or The Lone Ranger.
Leo DiCaprio and Martin Scorsese have gotten into the mix too. I mean, sure The Departed was awesome and I fucking love The Aviator but you know what isn’t good no matter what anyone tells you? Gangs of New York. I don’t care that Daniel Day-Lewis is in it, so is Cameron Diaz. And don’t even get me started on the fuck fest that is The Wolf of Wall Street. Yeah, I said it. And I know that there are a whole host of people who now want to lynch me because of what I just wrote and I get that. Nothing is more deliciously hedonistic than sitting in your underwear on the couch, Cheeto crumbs staining your fingertips and snake hole, jacking off to the wonders of The Wolf of Wall Street. Cause that’s all it is — a gluttonous bull-n-bear wankfest.
No one is immune to it. It happens to the best pairings of the best in their field. I mean, Splash is 80s awesome and Apollo 13 is pretty fucking rad and Tom Hanks and Ron Howard have done some amazing work throughout both of their careers. And then they did The DaVinci Code and Angels & Demons.
See what I mean?
But, I’m sure it’s gonna be different for David O. Russell and his merry band of followers. I’m sure Jennifer Lawrence’s fierce quirkiness or Bradley Cooper’s scruffy charm is going to keep shit from going down. Robert De Niro’s ability to transform himself into the ever-changing characters from Goodfellas, Casino, Meet the Parents, The Family, Analyze This…wait, what was I saying?
I’m sure David O. Russell isn’t headed down a very well-marked path to directing mainstream dreck starring people who should be doing more interesting work. That couldn’t possibly happen. I mean, let’s face it, the best way to learn and grow in your art is to work with the same people over and over again. It worked for the royals and their lineage. Nothing bad happened at all when bloodlines didn’t mix enough. Besides, working with the same people over and over again has proven successful for some people. Just look at Adam Sandler. There’s a guy who can hold his head up high when discussing his impeccable body of work. 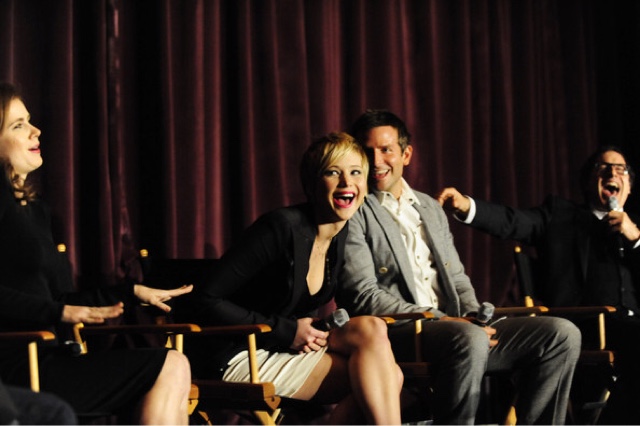