I’m a totally reasonable person. I try not to get hung up on petty or trivial things. I take pride in the fact that I don’t really care what celebrities are wearing or who anyone is sleeping with. The things that tend to really upset me have more to do with civil rights, health care, violence, poverty, shit like that.
Now having said ALL of that, I’m turning 40 next week and I fucking hate it. I hate it and I don’t want to and I am so totally going to approach this birthday kicking and screaming the whole way.
Now I do realize that — and yes, this next part is being delivered to the crowd from my perch on my very own high horse — I might not feel this way if I had a pair of balls instead of a set of tits and ovaries. Not because there’s some kind of property in estrogen that makes this particular birthday difficult but because, basically, men decided a while ago that at the age of 40 a woman’s vagina begins to rot out of her body and she no longer serves any sort of purpose for humankind or the subservient animal kingdom. And since we haven’t yet reached a time when the vast majority of men (and some women, too) are willing to share this world equally with us uterine folk, what they say tends to go. I’m just lucky that I’m not an actress cause if I was, I’d only get cast opposite Kirk Douglas, Alan Arkin or the second Albus Dumbledore once the big 4-0 hit.
I do admit to generally liking birthdays, despite the fact that mine is so close to Christmas. I have all the normal triggers that everyone whose birthday is close to Christmas has. One tradition that never gets old: when my best friend gives me my birthday gift, it is ALWAYS accompanied by her pointing out the non-Christmas wrapping paper. And you know what? I fucking appreciate that. But, as I was saying, I do. I like birthdays. I like the fun. I like the attention. Fuck, I like the presents. I’m woman enough to admit that freely.
But…for reals…I am seriously not liking this one. I remember when I was twenty, thinking to myself that I was halfway to 40 and how fast that first 20 years went. And now the next twenty have gone by. I hope I nail down the ability to savor every moment in the next twenty so it doesn’t feel like it’s flying by so fast. So I don’t close my eyes for what seems like a second only to realize I’m turning 60.
I have a sneaking suspicion though that this next 20 is going to be amazing. For maybe the first time ever in my life I feel on the cusp of something. I feel like I’m approaching the very beginning of my destiny and instead of pulling at my leash to get away, I’m running towards it.
So, maybe 40 isn’t going to be so bad. Maybe, just maybe, 40 is going to be amazing. Maybe, at age 40, I’ll begin to take over the world. And when I do, I’m going to make sure that 40 is no longer “old”. 40 will no longer be the age when people begin to decompose and slowly approach irrelevancy. And by people, I mean women.
40, instead, will be the age when we begin our ascent into a higher plane of existence. 40 will be when a new level of respect is reached and a new, more refined, thought process is developed. 40 will be the beginning of the Age of Enlightenment.
And, you know, 40 will be when we start becoming our most awesome selves. 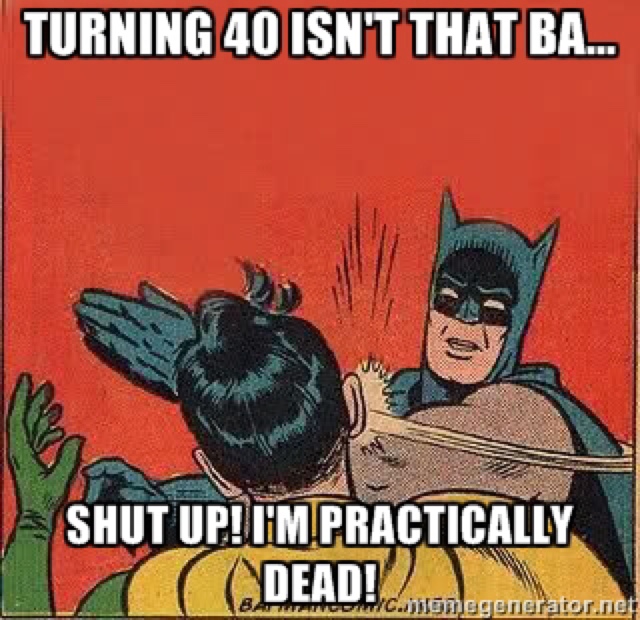