“Dear women, you ALL are acting tacky AF! Why don’t we overly (myself included) fortunate women come together and try to create and bring jobs to other women in desperate need of them so they can support not only THEMSELVES but their families! #happyinternationalwomensday can we all put the cuntiness aside for one fucking day and love / celebrate one another! PS no matter how hard you (or myself) work NEVER will I feel I am worthy of the comfort I live in…. Because so many others while I tuck myself in at night are laying their head on the pavement, dreaming of all the things we take for granted every day. Much love to all my women!!!”
Miley Cyrus posted this caption on Instagram, attached to a picture of Kim Kardashian’s Kimoji. And, I gotta say, I agree with her. Now don’t misunderstand, I’m not saying that I think Kim Kardashian should be famous. I have yet to see a skill displayed in that lady. I mean, fuck talent, just show me something that she actually does besides let cameras follow her around and allow her name to be put on products that she didn’t design, didn’t create, didn’t craft and didn’t conceptualize. BUT, having said that, maybe let’s not call her a whore. Maybe we shouldn’t be calling any woman a whore or slut or whatever word we’re using to shame them sexually. I understand that she gained fame for a sex tape. And no, I don’t love that. But not because she’s naked and fucking Ray J (badly, I might add). But because I don’t see her using that platform as a bridge to showcase some skill or art or talent or brand new thought. Seriously, anything in that area. As far as I can tell, her only goal was to be famous.
But, having said all of that, it’s still not a good enough reason to call her a whore. I mean, call her inconsequential. Call her annoying. Call her a hack or talentless. But it’s time we stop calling each other whores. After all, it’s been 12 years since Tina Fey and Mean Girls told us that we “all have got to stop calling each other sluts and whores. It just makes it ok for guys to call you sluts and whores.” And she’s right. We have GOT to stop the slut shaming. After all, if you slut shame women and you don’t slut shame men, you’re not a very good feminist, are you? Men and women are supposed to be equal in our world. So, seriously, if Matthew McConaughey’s deep desire to never wear a shirt just makes you shake your head and roll your eyes — that’s the exact same reaction you should be having towards Kim Kardashian’s exact same behavior. And if you’re one of the people who cheers when he does it, well, get off Kim Kardashian’s ass already.
Now, I’d be really nice if the story ended here. If Miley Cyrus just made us all feel like assholes who hate each other and who are so caught up in making other women feel bad about themselves that they needed Hannah Montana to teach us all a lesson. But sadly, she not equipped for that. I mean, she’s not Lizzie McGuire.
The second half of Miley’s story is how she decided, almost in the same space of thoughts as her Instagram post, that it was a good idea to post old photos of Jodie Sweetin clearly inebriated and grinding on a guy. Jodie Sweetin who is now sober and up front about her struggles with drugs and alcohol. Jodie Sweetin who is trying to help others with her candor. And Jodie Sweetin who is having success again, through Fuller House and now Dancing with the Stars.
So, Miley. Let’s talk, girl. You said some really good things in your Instagram post. Throwing shade and slut shaming are totally tacky, you’re right. Putting cuntiness aside and celebrating each other is something we really need to focus on. And women who are in the limelight might consider spending their time uniting to help other women instead of fucking acting like little bitches, clawing at each other’s faces. So, Miley, what the fuck happened? Why’d you defend one woman and then cut down another? What the fuck is up with that? I dunno. Maybe it’s cause Kim K is more famous. Maybe it’s cause Kanye is Kanye and you want him to like you. Maybe there’s some secret beef you and Stephanie Tanner have that the rest of us aren’t privy to. You should know though, when your left hand is bitch-slapping womankind for adolescent behavior at the same time your right is acting like a Heather, you’re gonna seem like a hypocritical bitch. And you’re not going to do a wonderful job at making your point, either.
It’s too bad, too. You made a good one. We need to stop judging each other harder than we judge men. If we’re gonna get pissed when men hold us to a different set of standards, we can’t fucking do it ourselves. And we need to just fucking stop being dicks to each other. That’s honestly not helping anyone. And how much more badassy would we all be if we supported each other instead of tearing each other down all the time?
You got some good thoughts in your head, Miley. Maaaaaaaybe apply them to yourself. 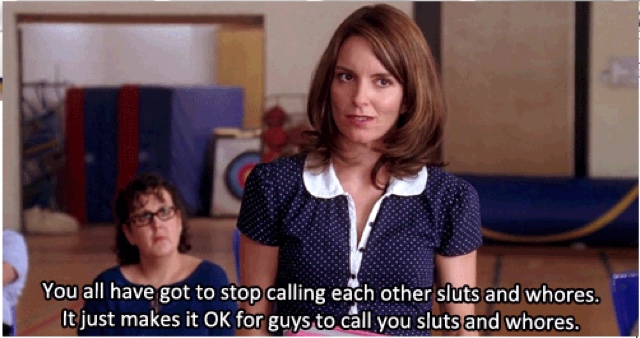